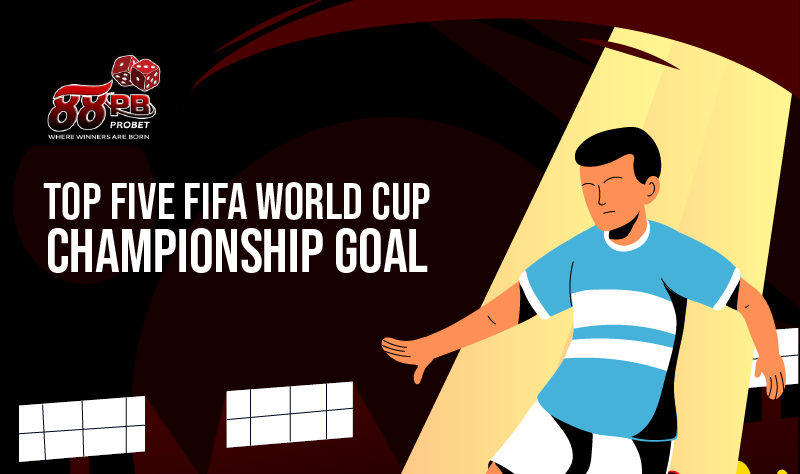 The FIFA World Cup is one of the most anticipated football tournaments, as it is a sporting event wherein the teams are not limited to players of certain amateur status or age. This quadrennial tournament is considered to be a competition among the world’s best football players.

As the new World Cup tournament installation begins in November, many punters and bettors await for their favourite teams and players to participate in the World Cup series. Accordingly, the footballing world also looks back at the memorable moments in the previous renditions of the tournaments to celebrate the World Cup, the stunning goals, and moments of sportsmanship between the teams.

Here are five of the best World Cup goals that made it down to history:

In 1958, Brazil defeated Sweden and won their first World Cup with a score of 5-2. Seventeen-year-old Edson Arondes do Nascimento, a.k.a Pele, contributed two goals for his team, thanks to his commanding performance and footballing skills. This earned him a place in football history – the youngest player to ever score in the final of a World Cup.

The talented teenager’s first goal went down in history as one of the most outstanding goals in a World Cup final. Meanwhile, his second goal stunned into silence the mostly Swedish crowd in attendance at the stadium in Solna. Pele executed an outrageous flick, chipping the ball over the defender then smashing it past Swedish goalkeeper Kalle Svensson. This strike extended Brazil’s lead to 3-1.

Although Pele’s goals endearingly wowed the football world, his composure while under pressure to score made his goals outstanding.

Saeed Al Owairan’s goal delivered Saudi Arabia’s first-ever World Cup win. What made it more astounding is that the score was made during the Kingdom’s first-ever participation in the football series.

During their participation in the 1994 World Cup series, the football world was not expecting much from Saudi Arabia as they were 500-to-1 outsiders. They opened against the Netherlands in the first group stage; however, they were defeated during the game, following a 2-1 score in favour of the opponent. Nonetheless, they regained their team’s glory by following up their loss with a win, defeating Morocco.

Saudi Arabia continued to impress the footballing world – it was their match against Belgium that made people take notice of them, as this was when Al-Owairan scored his historic goal. Within five minutes of the game, the Saudi Arabian forward took charge of the ball, controlling it while making an exhilarating 70-yard run and passing through Belgium’s defence. He ended his run by striking the ball past Belgian goalkeeper Michel Preud’homme. This extraordinary attempt scored his team a goal that set them to qualify for the round of 16.

Maxi Rodriguez scored one of the astonishing solo goals in the FIFA World Cup history – a great masterpiece that still bewilders the football world when watching replays of the historic goal.

Argentina had a thrilling match in the round of 16 against Mexico. The goal started with Lionel Messi, who received the ball at the midfield point but passed it inside to Juan Pablo Sorin after the ball was miss-controlled. Sorin played an astounding cornfield ball to Maxi Rodriguez.

Rodriguez anticipatively took the ball just outside the penalty box, calmed it on his chest, and lofted it towards the goal. At this moment, the football world looked on with amazement as the ball stunningly shifted its trajectory, hitting the inside of the net through the top corner.

In the 2014 World Cup, James Rodriguez contributed two of the most notable goals to Columbia, defeating Uruguay at the Maracana Stadium in Rio de Janeiro, which enabled the team to make it to the quarter-finals.

Rodriguez’s first goal was scored in the 28th minute of the game and is the most stunning – earning him the Pukas Award. He was waiting just outside of the penalty area, with his back to the goal and almost 30 years from the opponent’s goal.

Similar to Maxi Rodriguez’s historic goal, James Rodriguez took the ball on his chest after receiving it from Abel Aguilar. He turned to get a better shooting angle then struck the ball with his left foot. The shot went past Uruguayan players and hit the back of the net from the top corner. Consequently, he scored his second goal in the 50th-minute, ensuring victory over Uruguay.

Frenchman Benjamin Pavard shattered World Cup goal records, with his goal during the match in the round of 16 against Argentina deemed as the goal of the game, even so, the entire World Cup series. During the game, Pavard scored one of the most beautiful goals, which was his first-ever goal for France and is said to have defied the laws of physics – he volleyed the ball from an angle that is impossible to score.

Argentina commandeered the momentum of the game by taking a one-point lead against France in the 48th minute. However, minutes later, Hernandez attempted to cross from the left wing; however, the ball bounced twice through the core of the opponent’s defence. At this point, the ball landed at Pavard’s position; he then met the ball midair, striking it towards the goal with the outside of his right foot.

Pavard’s goal initiated a comeback for their team. This led France to beat Argentina with a 4-3 score and direct the team to the World Cup finals, which they later won.

For sports enthusiasts, the quintessence of any rendition of the World Cup is the goals scored astonishingly by the players. This shows their skilful tactics and masterful play. In addition, it also makes the football matches more thrilling. The goals scored also stick to people’s minds, influencing how they perceive the overall impact of the goal on the match and the reputation of the scorer.

The footballing world looks through the goals from the previous World Cup series as they await with enthusiasm and excitement the 2022 World Cup and anticipate if the upcoming rendition of the tournament will record astounding goals that will go down in history. Punters and bettors will be even more attentive with the World Cup series in November, as they can start planning for their betting activities for the tournament.

88ProBet is the ultimate destination for everyone looking for Singapore pools soccer odds that offers all the casino games and online sports gambling markets you know and love. If you want to start betting today, you can always visit www.88probett.com.