UEFA Euro 2020 Predictions: Who will win the European Championships?
Skip to content 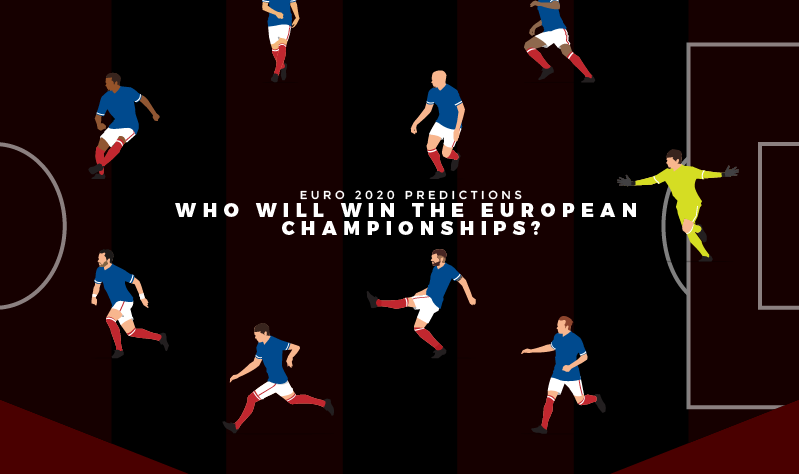 Football fans worldwide were left at the bay of their sporting and betting inspirations when the European Championship, one of the most anticipated events in 2020, has been postponed until the summer of the following year amid the coronavirus pandemic.

With the summer of 2021 fast approaching, the UEFA has announced the official start and schedule of the Euro 2020 Championships. The tournament will take place from June 11 to July 11, with each match staged in 11 different cities across Europe and the semi-finals and final games to be played at Wembley.

Aside from the tournament schedule, teams that have qualified for the championship games have also been finalized and group. With this, many hopeful football fans and bettors are getting more excited and preparing for another set of football matches to watch and wager on.

With 24 teams going to charge for the title, punters are already looking through each contender’s strengths and weaknesses to weigh which will win the Euro 2020 finals. Below are the seven teams predicted to most likely lift the silverware on July 11 this year.

Since 2014, the Red Devils have been regarded to have the most talented national team and backup players in the world of football. However, in 2018, they have fallen short at the FIFA World Cup after being edged out by France in the semi-finals.

While this has been the 2018 FIFA World Cup case, their quest for a first major trophy goes on. With Eden Hazard, Kevin De Bruyne, Thibaut Courtois, Romelu Lukaku, and Dries Mertens among the players completing Belgium’s Red Devils, the team looks menacing.

Though many experts claim that this year’s UEFA European Championships will be Belgium’s last chance to lift the silverware as their so-called “golden generation” is gradually entering their 30s, the team is still regarded as one of the favorites winning Euro 2020.

The team enjoyed a perfect ten straight wins in qualifying, with 40 goals and just three conceded. This includes the 3-1 and 4-1 triumphs against Russia, which the Belgium men will reoppose in Group B, alongside Denmark and Finland.

In qualifying, Trent Alexander-Arnold, Jadon Sancho, and Tammy Abraham, among England’s starlets, have shown determination, delivering a whopping 37 goals and winning seven out of eight qualifiers.

This year, for the UEFA European Championship, having a home advantage in the closing stages could boost the team, plus Harry Kane and Marcus Rashford will now be cleared up from their injuries. England will face Croatia, Czech Republic, and Scotland in Group D.

Les Bleus has the most balanced team at the moment, with the team having the World Cup champions title. They also finished second at the last renewal of the Euro Championship competition. Due to their ranking at the FIFA World Cup and the Euro 2016.

Accordingly, having Kylian Mbappe and Antoine Griezmann in the attack, Paul Pogba and N’Golo Kante in the midfield, Lucas Hernandez and Samuel Umtiti in the defense, and Hugo Loris guarding the goal, it will be challenging to beat them.

Qualifying went relatively smoothly for France, garnering eight winds and a draw from ten games. They will be taking on football teams in Group F — Hungary, Portugal, and Germany.

Though La Furia Roja faltered in the 2018 FIFA World Cup and 2019 Nations League, the team is a significant challenger in this year’s UEFA European Championships. Their total domination of essential tournaments in both European and global areas from 2008 to 2012 cannot be written off, and fans still consider Spain an absolute favorite in any competition they enter.

The team’s golden generation is now gone, but a new breed of young stars is coming through the ranks, helping Spain win during the qualifying for Euro 2020. They won eight and drawn two of their ten games. With their current game standings and performances, they should win against opponents in Group E – namely Sweden, Poland, and Slovakia.

Portugal is the reigning European champion and the winner of the 2019 Nations League. Due to this, many experts and fans believe they could make history and retain their title this year. Portugal will face football teams in Group F in the Euro 2020 finals.

In the European Qualifiers, the team only finished second in their group, behind Ukraine, after a 2-1 loss last October. But this should not worry as Portugal has a satisfactory record in this tournament and plenty of talented players. Aside from Cristiano Ronaldo, the team also has Bernardo Silva, Bruno Fernandes, Jao Felix, Ruben Neves, Diogo Jota, Ricardo Pereira, Jose Moutinho, Joao Concela, and Rui Patricio. These players were doing well with their performances on the field, with several even putting great potentials in the English Premier League and La Liga.

Italy missing out on the last World Cup and failing to make it out of their Nations League group were seen as a national disaster. Because of these, the Azzuri are trying to make amends by making their comeback in international tournaments and become hopeful with a European Championship success since 1968.

Italy won all ten fixtures during the Qualifiers, with 37 goals scored and just four goals conceded. Because of their performance in qualifying, Switzerland, Turkey, and Wales are seen as beatable rivals in Group A at the UEFA Euro 2020.

Despite missing out on the last renewal of the European Championship and the World Cup, Netherlands has shown a series of promising performances at the Nations League, beating England in the semi-finals.

The team then qualified for this year’s Euro Championship, finishing second in their group, only two points behind Germany. They seem to have awakened from missing out on previous major tournaments, as they showed an increase in stature and confidence in their performance during the Qualifiers. They made it appear that they are looking to prove that they can become a significant contender for football championship titles.

For the Euro 2020 Finals, they need to repeat the same level of performance and beat their opponents in Group C, namely Ukraine, Austria, and North Macedonia.

Before UEFA Euro 2020 kicks off in June, punters must not wait until then to research teams playing for the tournament, particularly when they want to participate in betting events. Understanding and paying attention to individual players or group’s standings and performances among the best strategies that bettors can do to improve their chances of winning a bet.

Besides researching to make an informed bet, they must also look for a reputable sportsbook to ensure better user experiences and guarantee the safety of their wagers.

88ProBett is the most trusted and reliable Online Sportsbook in Singapore. It is the ultimate destination for everyone who wants a complete sports experience. Start betting today or play other games on online casinos at www.88probett.com.